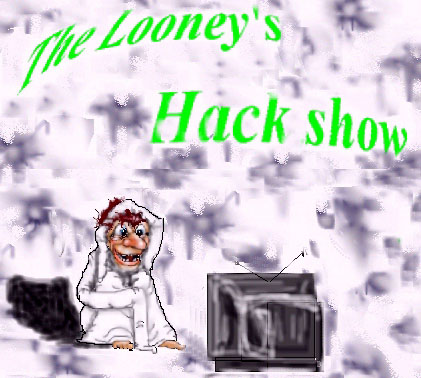 The Looneys Hack Show is defined in the Encyclopaedia Titanica as "a no-budget public access show produced by a bunch of members of the ex-cast of the Rocky Horror Picture Show of Manchester, Connecticut and a number of societal misfits from the Rochester Institute of Technology."

Three half-hour episodes of skit comedy were produced between 1991 and 1993 using the facilities of Mad River TV-13 in Winsted, Connecticut and The Looney Bin in Rochester, New York. The episodes were aired on the Mad River TV-13 public access channel. A 15-minute episode was produced in 2005 using the facilities at The Looney Bin West in Gilbert, Arizona.

The History of The Looneys Hack Show

The Predecessor: Remake of the Daleks

Predating the Hack Show, Remake of the Daleks was written by Kevin Brayton and [that other guy]. It is a parody of Doctor Who, done in the format of a silent film. This was videotaped early in the 1989-1990 school year (calendarwise, autumn 1989) in the tunnels under the Dining Commons at Rochester Institute of Technology.

The video was put together on a whim. Production qualities are poor in that only existing lighting was used, resulting in many dark scenes. Camerawork is not always steady, and the acting is pretty bad. The choices of music, however, stand out. Original editing involved using two crappy consumer-grade VCRs without flying erase heads, but Kevin Brayton reedited this in 1998 and it is presently in the videos available.

The Looney's Hack Show, more commonly just called The Hack Show, was initially a creation by Peter (now Perette) Barella in the early 1990s based on weird ideas from various circles in which he (she) traveled. Most of the ideas originated from the Looneys, a group of friendly geeks at RIT. A few of the skits originated with the Rocky Horror Picture Show cast in Manchester, Connecticut.

There were 3 episodes in the original set - #1: Bricks, #2: Dead Things, and #3: Money. All three were put together using editing facilities of Mad River TV-13, a public access station operating in Winsted, Connecticut at that time. Several of the skits were videotaped in the Mad River studios.

In the original cuts, Bricks was comprised of mostly in-studio work taped using friends from the Rocky Horror/Manchester cast. Despite having its moments, the episode was pretty bad. Dead Things was composed significantly of the same folks, but featured much more out-of-studio work and one skit taped at the Looney Bin in Rochester, residence of several of the folks involved in the show. Quality of camera work, audio, writing, and editing was all improved over episode #1. Money was taped entirely with the Rochester cast. Kevin Brayton took a significant role in directing this episode. Brock Prusha, a veteran of homemade stuff of his own, did much of the camera work and gave us lots of tips. His direction and teachings, as well as our own learning and investment in a few pieces of equipment, brought us up to a good level of quality. Or, at least, not gut-wrenchingly bad.

There had been planning for an episode 4 back in that time frame, but the effort fell apart as folks went off to co-op jobs during college at RIT. Following equipment upgrades at the Mad River facilities, the original three episodes were re-cut. The worst parts of the original episodes were cut and replaced with completed bits of the defunct episode 4. This is why, in 1: Bricks, there is the one really nicely produced skit.

There was talk for years about bringing the show back. Kevin Brayton purchased a video capture card and created some animations for the show in the 1995-1996 timeframe. In 1997, Barella bought equipment to set up a linear editing suite. Unfortunately, the choice of a Videonics AB-1 edit controller was unwise, and left editing virtually impossible. The show, therefore, continued to stay out of production.

Over the years, several scripts have been hammered out. Filming for various pieces has been done over the years, but editing facilities were never in place. And, we were all busy with other things.

In 2002, videotaping for one skit was completed. Furthermore, open-source editing software was available, and the low price of hardware made it possible to construct a reasonable, inexpensive non-linear editing system. Matthew Lecher devoted much time to specing out, assembling and installing the editor. Two pieces were completed: the NGE music video and Fast Food's Greatest Mistakes. In the end, though, the Linux-based video editor proved too unstable and the project was once again abandoned.

In 2005, Kevin Brayton produced the Collectors Edition DVD. The DVD contained all three episodes that had been previously produced. He assembled a new 15-minute episode using the skits that were made in 1997 and 2003, as well as completing new skits from footage that had been recorded for the second attempt at episode 4. Also included on the disc were an outtakes reel and Pumpkin Carving with Garden Tools, an exercise in how to use the wrong tool for the job from a 1995 Halloween party that Barella and Brayton hosted.

All material on hackshow.org is copyright 2005 Red Brick Productions. All Rights Reserved.